Theme is “Alice in Wonderland”

Have you always wanted to be featured in a Second Life magazine?
If so, then this is your chance!? Each month, YourStyle Magazine will be picking out four of the best photo submissions for our monthly contest.

What do you need to do to participate??

2. Take a photograph of yourself depicting the current theme. It has to be a half-body or full-body shot.

3. This is a creative contest so show your BEST and MOST FLATTERING photos. You may edit and style your photos using a graphics editing software or seek the help of a photographer/stylist (this may cost you service fees).

5. No company name/s on the photographs

6. Pictures must be placed in our Flickr group: YourStyle April Contest

This contest is open to both men and women!

April 2010 Theme is “Alice in Wonderland”

**Winners will be announced in the Flickr group, contacted in-world, and will be published in the May issue of YourStyle Magazine**

Yourstyle Magazine belongs to Yourstyle Fashion group.
YourStyle is the group to be in when you are a fashion lover.
Here you will be updated for Brand Releases, Fashion Trends, Information about Designs and Designers.

No magazine without any good fashion pictures.
Did you always had a dream to see your own picture in a SL magazine?
Well this is your opportunity to get in.

Every month Yourstyle will put in the best 4 pictures they will pick from our contest every month.
Each month will have there own theme.

What do you need to do?

2) Make a picture that is coherent to the theme. It has to be a half body or Full-Body Shot.

3) Make quality pictures, edit them. You can make then your self or ask an photographer. We will only pick high quality pictures because they will be used in the magazine. Besure to give us full perms.

5) No name of a company in the picture 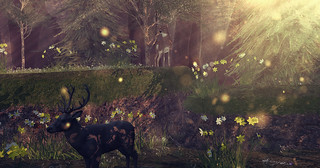 This contest is for male and Female!!!!!!

March theme will be : Easter

Winners will be announced in the Flickr group, contacted in-world and will be published in the April issue from Yourstyle Magazine