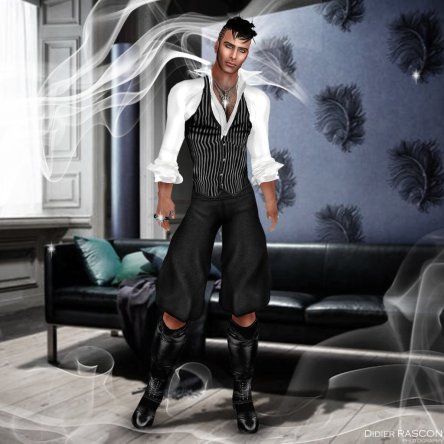 My name is Didier Rascon, I was born in SL on December 13th, 2008 and since September 2010 I am really happy to be married to one of the best model of SL, Angelik Lavecchia.
As an architect in RL I started my SL by building some houses. But the huge potential of creativity offered by SL made me understood that I had the chance to do something completely different from my RL. Then I started to use my graphic skils to design and create clothes for my own. I finally opened my own clothing store, and I am now the designer and owner of the brand  “House of Europe”, having clothes for both women and men.

Since being in the world of fashion, I naturally slipped into the desire of becoming a model. I quickly started to do castings and to make fashion shows, but to improve my skils in modelling and styling I entered the Ms Virtual World Academy where I proudly graduated in September 2010, with the help of awesome teachers like Kay Fairey and Mimmi Boa.

Today, I am really proud to be an official finalist of Mister Virtual World 2011 pageant where I will have the amazing chance to represent my RL country : FRANCE.

Why I have enter MVW :

I heard about this pageant last year when i was a beginner model. Of course i tried to enter it by submitting my picture, but i know today i was not prepared and not good enough to compete with the best men of SL.
But entering the MVW pageant was a dream and a goal for me ! I was waiting for it and now i an truly happy to be a finalist 🙂 I will now give my best in this competition, and whatever will be the result, i know i will be proud of me !

Swansong is a year old!!!! To celebrate everything is half price until 31st July 🙂
Visit Swansong: http://slurl.com/secondlife/Reality/111/132/22