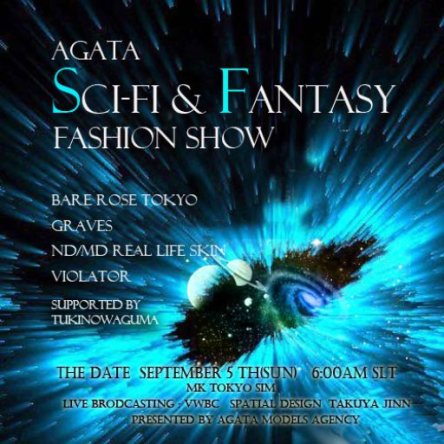 The Sci-Fi world has a huge popularity within movies and novels. Fashion that appears in this fantasy world has, at times, something that exceeds far beyond our imagination.
It is an honor to introduce to you 4 brands that offer nothing but high quality outfits for this wonderful world of fantasy. We have created a special stage and audience settings. Please enjoy!

To avoid lag and make the runway as smooth as possible for the models, we would like to take this opportunity to request guests to arrive in low ARC (Average Rendering Cost: preferably under 1,500) outfits, remove all attachments such as AO, facelight, scripted items.

The show will be broadcasting live from VWBC for thos who can not come to the show.  Please check out the following web link and enjoy it. VWBC
VWBC
http://www.ustream.tv/channel/vwbc

The scenes have been set, the models are ready, the first rows are crowded of glamour and the signature collections will be revealed shortly in all their chicest amazement.

September will be a fashion climax in Second Life comparable only to the real most rich month of the year. Bliss Couture will share its autumn-winter 2011 inspirations showing the most desirable proof of the designer talent.

After falling in love with sensual, see-through lace, pure colours and the retro dressing as homage to female forms and also the delightful beauty treats during the summer time, Bliss Couture will present its super lux, and still fresh, new appeal for the upcoming season with both gowns and hair collections.

The luxury house will be part of the intense calendar of events and is glad to remind them:

All the events and complete informations about the new collections will be announced in our group and subscriber.

Bliss Couture wishes you a great September and hopes you will enjoy like we do.